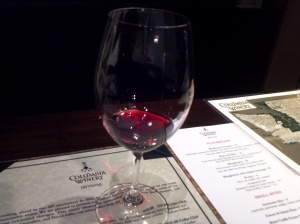 Our second stop on my recent Woodinville tasting trip was to the Columbia Winery. As I mentioned in my earlier post, I went with my brother Seth, who also did an excellent summary of our tastings.

Pulling into the parking lot, the winery was exactly what one would expect when tasting wine – a large manor with groomed lawns and an inviting porch.  As we walked inside, we were greeted and automatically felt at ease.  Inside the winery there was not only the tasting area but also a fireplace with seating, all very warm and inviting on a cool March day.

We selected our flight of four and our hostess was very helpful in explaining each pour and offering her thoughts and insights on the wine.  This is something I really appreciate, since my knowledge of wine is somewhat lacking.

Our tasting ($5 each) included:

The wine that stood out to me the most was the 2001 Otis Vineyard Cabernet Sauvignon.  The hostess had us try this one after we had tried the 2008 Cabernet Sauvignon, so that we could experience and taste the difference between the newer and aged wine. The wine was dark red, almost amber in color with a mellow nose – it was smokey and reminded me a bit of a musty/old basement.  At first, I didn’t think I was going to like it based on the smell alone.  But the taste was a little surprising to me – it was smooth and reminiscent of dark fruits.  There was a bit of a burn from the alcohol, but there was a little spice to the burn.

Our hostess mentioned the wine would be good for grilled or smoked foods. Automatically, it made me think of a summer barbecue, steaks on the grill, eating on the porch.  I ended up purchasing a bottle to try during grilling season.

Another wine that surprised me during this experience was the 2010 Columbia Valley Rosé.  When I saw the wine in a display at the tasting room, I automatically thought “summer” something I was so craving – so I had to try it.  The color was a very light red – pink almost.  It smelled of sweet fruits, like strawberries and syrup, very light and fruity.  What was surprising was the taste – I was expecting an almost too sweet to drink wine, but it was almost sour.

This got me thinking – is that how all Rosé’s are – sweet smell but a sour taste or are there some that are sweet all around?  Another wine I will have to investigate more.

This site uses Akismet to reduce spam. Learn how your comment data is processed.

Get updates in your inbox!