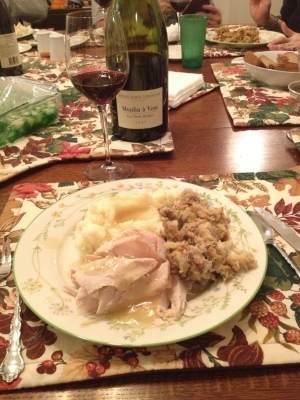 After leaving Alsace, I had originally planned on heading straight to Bordeaux, but my plans were changed.  I ended up making a stop in the Beaujolais province – an area of France that is located north of Lyon and intersects two different wine regions – the Rhone and Burgundy.

My brother Ian, who had originally opened my eyes to Burgundy wine, wanted me to try Beaujolais, so I could compare it with Burgundy.  Plus, it made for a great pairing with our Thanksgiving dinner.

Our Beaujolais of choice: Pierre-Marie Chermette Moulin à Vent Les Trois Roches 2009. This wine is made from Gamay grapes only from Moulin à Vent, which is one of the 10 Cru villages in the Beaujolais region.  [Side note – the Cru villages are the best growing areas and vineyards in Beaujolais.]

The wine was a ruby-red, with black undertones. To me it had a nose of berries – strawberries and cherries, with hints of alcohol (which I believe is tannins).  To me, the wine tasted of tart pie cherries, tannins and black grapes.

I really enjoyed the fresh and lighter taste of the wine. I thought it paired nicely with the dark meat of the turkey, stuffing and mashed potatoes.  Some red wines are rich and heavy, but this wine didn’t weigh down the meal (or my stomach), but actually complimented it.

I am also happy to find I am making progress with my nose and palette, when searching to see what others said about this wine, I found a nice post on Blog Vin  which gave a thorough review of the wine.  I found the Sylvain Boutin and I had a similar conclusion to the nose – we both could smell berries – I am making progress!

Overall, I am really starting to enjoy French wines, their complexity and the diverse taste.  So, I will continue to ping-pong across France (because I can) and my next adventure will be Bordeaux, and then I will head to the Loire Valley in search of a good Vouvray.  As always, I am happy for any recommendations (food, wine, regions or all three) along the way, so do not be shy 🙂

A note on the photo – that is actually my husband’s meal.  I casually swiped his plate for the picture, right as he was setting it down at his seat, getting ready to eat.  I wish I had a picture of his face – complete shock and disbelief that his wife would steal his meal.  After a good laugh, I did return his plate and got my own dinner.

I am a working mother of an energetic five year old and a thirteen year old. I didn't read any parenting books and this is my story of how I am surviving being a mother and loving it! View more posts

One thought on “Pairing Pierre-Marie Chermette Beaujolais and Thanksgiving Dinner”

This site uses Akismet to reduce spam. Learn how your comment data is processed.